12th IAAF World Junior Championships
Posted Sunday 13 Jul 2008 by Michael Gentle
Bridey Delaney
has finished 5th in the final of the Women's 1500m in a time of 4:21.20. Congratulations on a great effort Bridey. 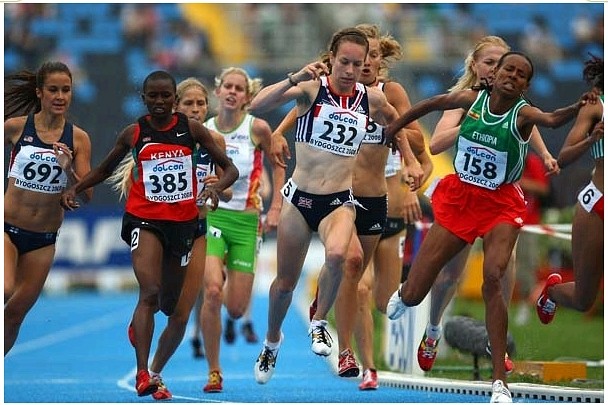 "As you expect in a world major final a very tactical race went down (65 second third lap after slow 2:25 at 800m) with a lot of jostling. Bridey managed to survive the stoush and finished with her signature kick home to come in fifth. Bridey is over the moon with this result - rank 11th out of 12 coming into the final." - Kim Delaney

"Bridey Delaney finished a sensational fifth in a rough, tactical race in the women's 1500m final. Despite the slow nature of the race Delaney showed that she had been prepared for the championships immaculately by her coach, former two-mile world record holder Albie Thomas. Delaney crossed the line in her third fastest time ever: 4:21.20. "I came into the final with the slowest time, so to finish fifth is great," said Delaney." - Taken from Athletics Australia news report

12th IAAF World Junior Championships
Posted Friday 11 Jul 2008 by Michael Gentle
Bridey Delaney
has qualified for the final of the Women's 1500m today in Bydgoszcz, Poland. Finishing with a super burst, Bridey gained third place in heat 1 with a personal best time of 4:20.82.

The final is to be held on July 13. Good luck Bridey!

"Bridey Delaney ran a nearly textbook perfect race in her heat of the women's 1500m to set a new personal best and automatically qualify for Sunday's final. The 18-year-old led through the first lap of the race in 69.35 seconds, but knowing the risk of becoming boxed in, chose to run on the outside edge of lane one. After 800m was passed in 2:23.71 the pace increased. Despite being passed Delaney maintained a clear run. At the bell she was in seventh place, but began to move up with 200m remaining and ran strongly down the straight for third place in 4:20.82." - Taken from Athletics Australia news report.

Congratulations from everyone at St George DAC.

Gold Coast Marathon
Posted Sunday 6 Jul 2008 by Michael Gentle
Ben St Lawrence
has won the 10km event at the Gold Coast Marathon today in a time of 29:42.
Sergio Carvalho
finished 13th in 32:16 in the same event.

St George athlete
Bridey Delaney
is a member of the Australian team. You can leave a message of support for Bridey and other team members here.

Best wishes to Bridey for a great result and a memorable experience representing Australia.