Merry Christmas
Posted Sunday 20 Dec 2009 by Michael Gentle
The Executive Committee of St George District Athletic Club wishes all athletes and their families a very Merry Christmas and a Happy New Year. Have fun, stay safe and we look forward to seeing you on the track in January.

Zatopec: 10
Posted Thursday 10 Dec 2009 by Michael Gentle
Ben St Lawrence
has recorded a B Qualifying time for the 2010 Commonwealth Games in finishing second in the Open Men's 10000m; while
Bridey Delaney
has won the Open Women's 1500m event at Olympic Park, Melbourne. Congratulations to Ben & Bridey.

NSW Relay Championships
Posted Tuesday 24 Nov 2009 by Michael Gentle
A deserved well done and special thanks to all SGDAC competitors who turned up to compete and represent our Club at State Relays held last weekend Sat 21st and 22nd November at Blacktown Olympic Park. Additional thanks also to all the supporters who turned up to cheer on family and friends in this competition, and also Jim Gallagher who gave valuable assistance over the weekend.

Extremely hot conditions were the order of the day for both days of competition. When the temperature hit the mid 40 degrees on the second day of competition ANSW had to wisely make a safety call and cancel all the 1500M relay races and also 1600 Sprint Medley (8,4,2,2) open finals. A fair bit of disappointment for some of the keener competitors at first, but on reflection it was widely accepted that the right decision had been made by ANSW.

Some outstanding results were achieved by our Club members on the two days - the temperature was running hot and so were our women's field teams. They managed to claim 3 gold and 4 bronze medal positions.

Alix Kennedy broke her own U18 and Open Women's Discus Club Records with a tremendous throw resulting in a New Club Record of 46.32m. This beat her previous records of 44.83m (All Schools, 5-8 Nov 09) and the record attained last season of 44.14m (30/11/08). This throw was only 62cm off the Qualifying Distance required to meet the initial selection requirement for the World Junior Championships to be held in Moncton, Canada in July 2010.

Our U18 Women's Javelin Throw Relay Gold medal winning teamÂ with a total of 134.70m were only 30cm off breaking the State Record.

There were also some good results achieved by our relay teams on the track, especially when you considered some late formations were required to help field some of these teams. I would like to acknowledge our Club Track Captain Chris Barakat and his fellow track athletes - Stephen Smith, Scott Manns, Kerry Cree and Paul Windridge - who not only performed well on the track in the Open Men's 100m and 200m heats as well as coming 6th in the Open Men's long jump, but also assisted in setting up our base on both days.

As mentioned earlier, the withdrawal of the 1500m relay races was a disappointment for a number of our competitors although a few of the late recruits might have been a little relieved. Take the sporting gestures of our webmaster Michael Gentle, a late call to help form one of the 1500m relay teams, who had already ran a half marathon in the morning and his son Aaron who had completed a 10 K was also on standby as reserve for the U20 1500m team. Not forgetting Trish Simpson who had volunteered to make up the position in one of the 200+ male 1500m teams after a very late request even with a couple of painful blisters on one foot.

Our U20 800m Relay team came in 6th place with some young runners mixed in to formed this team - Tim Hogan, Thomas Delaney, Riley Delaney and 12 year old Mark Simpson who ran the final leg giving it his all on the day for his team. Our two 200+ 800m relay teams really put plenty of red and whites on the track, with all putting in their best efforts resulting in a 4th and 12th position in this event. Sean Hogan, Dale Jones, Jose Carvalho, Kim Delaney, John Irvine, David Burns, Peter Fitzpatrick and Bob Simpson made up these teams. While on the Sunday Frank Scorcelli was set to run in the 1500m 200+ and Daniel Siepen likewise in the U20 1500m race that was cancelled.

Finally the biggest thanks must go to all the St George Coaches whose time and dedication is the main reason our Club performed so successfully over the weekend - with special mention to the brilliance of Ray Russell and Michelle Douglas whose athletes performed so marvellously on both days.

Great North Walk 100
Posted Sunday 15 Nov 2009 by Michael Gentle
Nikolay Nikolaev
has completed the gruelling 100 Mile Great North Walk ultra-marathon in the time of 35 hours 48 minutes. This year's event was struck by abnormally high temperatures that saw more than half of all starters fail to finish. Congratulations Nikolay! 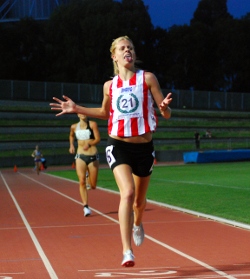 Over The Top
Posted Thursday 12 Nov 2009 by Michael Gentle
Over The Top is a new book detailing the experiences of Digger Harry Hartnett,
Nola Thomas
's father, at Fromelles and the Somme on the Western Front of World War I. Articles about the book appeared in The Daily Telegraph and the Melbourne Herald Sun yesterday.