The weather conditions were great and we saw some great performances and efforts from the red and whites. For our junior athletes, it was a test of seeing how they rank against many of the state's top runners in the lead up to NSW All Schools and also served as a major selection trial for the NSW team for the Australian Cross Country Championships.

A big thank you to all runners for participating. We hope you enjoyed the true cross country experience that only the Nowra venue can provide.

We particularly acknowledge those runners who came home with a State medal: 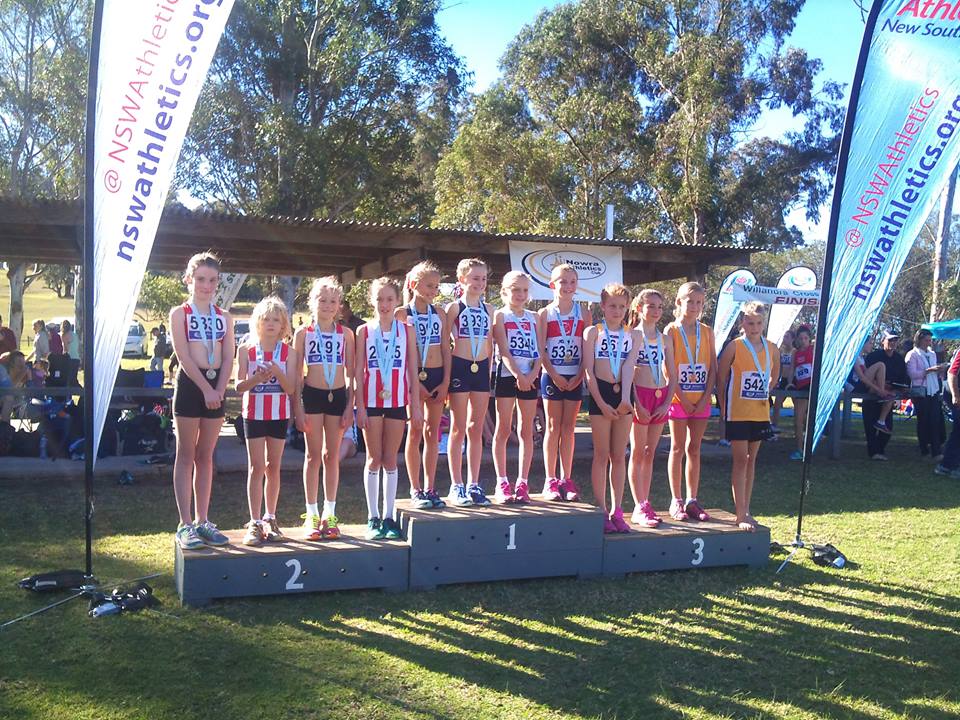 We also had a number of runners in the fun run so well done to you.

A big thanks must go to our dedicated president Kim Delaney who travelled down to put up the tent and to provide a lot of encouragement and support to all our runners around the course.

Congratulations to the three St George members who received nominations for awards:

NSW Cross Country Relay Championship
Posted Saturday 31 May 2014 by Michael Gentle
Congratulations and thanks to all runners, team managers, supporters, parents and helpers for your efforts at the NSW Cross Country Relays at Miranda Park. Your combined contributions made the day one of the best, in terms of demonstrating club spirit, in recent history.

We were one of the biggest clubs on the day and we had our highest participation rate in recent years (23 teams and approximately 90 runners!).

A big thank-you to competitors who filled in by running in two relay teams:
Imogen Stewart
,
Emma Blanch
,
Chris Breen
,
Frank Scorzelli
,
Belinda Martin
,
Mark Simpson
and
Nathan Breen
(3 races). It was great to see so many enthusiastic kids (and adults) wearing the red and whites of St George!!

A great effort by all involved, but we especially congratulate our St. George State Medallists:

Albie Thomas Rockdale Fun Run
Posted Monday 26 May 2014 by Michael Gentle
Congratulations to all the competitors and big thanks to all our volunteer's who helped make this another successful morning.

Albie would have been ecstatic with the money raised to go to his favourite charity, the Knights of St George Heart Association.

Special thanks go out to Rockdale council in their support and our Treasurer and manager of this event David Beck.


Just wanted to congratulate and thank you and all the St George Athletic Club members who helped out today. What a great turn out and great event it was. You should all be very proud of the event that you have held today. Dad would be "tickled pink" with the event you put on in his name. Mum was also taken aback with it all. Thanks so much.

IAAF World Relays
Posted Sunday 25 May 2014 by Michael Gentle
Australian endurance runners have performed with pride on an exhilarating opening day of the inaugural IAAF World Relays in Nasssau (BAH), with the women's 4x1500m and men's 4x800m teams earning a podium spot and fourth place, respectively.

Inside an atmospheric and colourful Thomas A. Robinson Stadium, the quartet of Zoe Buckman (Vic),
Bridey Delaney
(NSW), Brittany McGowan (Qld) and Melissa Duncan (Vic) produced a gutsy team performance to stop the clock in third position in 17:08.65 and trim 1.10 seconds from the previous best-posted Australian team time from 14 years ago.

Buckman, the 2013 IAAF World Championship seventh place finisher, produced a herculean first leg finishing only a stride behind Mercy Cherono (KEN), who earlier this month in Doha (QAT) became the sixth fastest woman in history for the 3000m.

Buckman was bumped to the ground by the incoming American runner at the changeover, although she thankfully exchanged the baton with second leg runner Delaney. On leg three, with national 800m champion McGowan holding the baton, they were relegated to third as the American team surged ahead. Duncan then completed their podium quest with an accomplished run as anchor.

Unfortunately, a timing issue meant official splits were not recorded. However, a joyous Australian quartet was delighted with their performance.

Congratulations to Bridey for her part in a fantastic Australian result.